The election in the Fall of 2016 marks a milestone in Florida history and the end of an era of corruption in Florida politics. It is important election for Steele Olmstead because he put his entire finances  at risk to make voting fair in Florida.

Florida beginning in the 1800s was always a victim of rigged elections by the Tallahassee politicians. In the 1940s it was the “Pork Chop Gang” of Dempsy Baron.  He and others like him “gerrymandered” voting districts to keep themselves in power or to cement their party’s power.  They do this by drawing districts so minority voters stay minority. This can help or hinder a political, ethnic, racial, linguistic, religious minority.

In Florida, in addition to suppress minority candidates, gerrymandering is used to protect 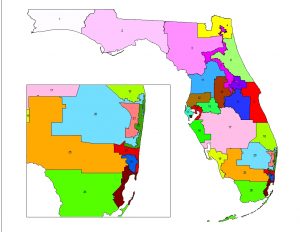 people in office already, “the incumbents.”  You only have to look at the voting districts drawn by the Florida legislature to know something weird was up.  Look at North Carolina’s 12th District to the left. Why would a voting  district look like that?   Answer: to keep the party in power with gerrymandering. Look at the 5th district in this map in Florida, purple one in the middle. Look at the ones down near Miami. That makes no sense whatsoever….. unless you’re gerrymandering.  Then its exactly what you want.

This corrupt system has worked though. In the last election, 90% of house of representatives members got reelected and 91% of senators got reelected despite Congress’ approval rating is 12.7%. The Florida Legislature’s approval rating is 27%.  Why are they still in office? Gerrymandering.  Despite calls to change the system, the Tallahassee politicians didn’t want to give up the ability to use gerrymandering the districts as their own job protection plan.  Gerrymandered districts prevents them from being thrown out of office when they should be.

Who can forget the debacle of 2000 when Florida became the laughing stock of the nation because the state had “gerry-mandered” districts and 90,000 voters were thrown off the voting lists by the party in power?

A Miami lawyer, Ellen Friedin, finally decided to do something about it.  She started a group called Fair Districts Florida. That group.  Steel Olmstead, recognizing the importance of this group for government reform, gave to this non-partisan effort repeatedly. He wrote letters of support and contacted his friends, colleagues, fellow lawyers representatives about supporting these worthy amendments.

There was great opposition by the powers benefiting from the unfair voting system. Several groups, including business groups, opposed changing the system which benefited their business interests. Finally after much opposition and visits to the Supreme Court, two amendments were submitted to the voters. Amendments 5 and 6 were passed with more than 63%of the votes.  Florida voters were tired of the rigged election system also.  But the snake was not dead yet.  The business interests and the Florida legislators who benefited from the rigged system, refused to follow the Constitution with Amendments 5 and 6 and continued to “gerrymander” the voting maps. The Tallahassee politicians did not want to follow the constitutional restrictions placed on them by Florida voters.

Steele’s service to fair voting and Florida’s Democracy was not done.

Ellen Friedin called on Steele again because of his financial support, letter writing and phone calling, during the fight for Amendments 5 and 6. This time she needed him to take a big risk: to be a named plaintiff to sue the Florida legislature and make it obey the will of the people.  This was a significant undertaking. If the lawsuit to force the Florida Legislature to obey the Constitution lost Steele’s entire wealth could be taken by the legislature for its attorneys fees and costs. It would be expensive litigation.

Nevertheless, Steele agreed to be the plaintiff  and the lawsuit was filed. 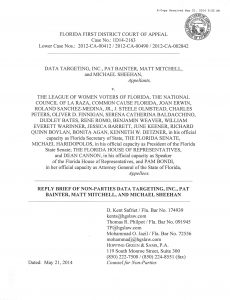 The Florida Legislature, with full access to the financial purse of the State of Florida, spared no expense fighting this lawsuit.  Experts, maps, charts, consultants and dozens of lawyers, legal assistants, paralegals, secretaries and clerks were used by the Legislature to keep the rigged system in place. The costs were enormous. In the end, the Legislature was ordered to re-draw the maps.  Everyone waited to see if the politicians were finished gerrymandering.   They were not.

Even after the maps were finally re-drawn, the Legislature had still tried to “pull a fast one” and the lawsuit continued. The legislature said it had “obeyed” Amendments 5 and 6, but it was obvious it had not.  Steele’s side fought on.

Finally, the case came before the Supreme Court of Florida. Would the court agree with Steele’s side? 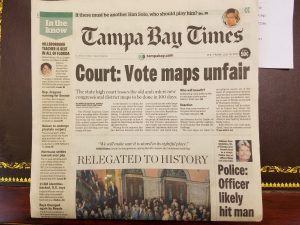 The resistance by the Legislature to the will of the people and Amendments 5 and 6 was over- ruled by the Florida Supreme Court.  The Legislature was ordered to comply with the Amendment and draw fair maps.  Finally. 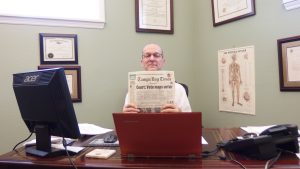 The answer was a great relief to Steele.  He was filled with a great sense of relief as the worry about losing everything vanished.

Still, nothing could be better than knowing that when people went to the voting booth, the maps that now determine where they would vote would not be rigged or “gerrymandered.” More than one hundred years of Florida politicians rigging the vote was now unconstitutional.

This is the type of service Steele provides to the community. He says: “Just knowing that people will vote in fairly drawn voting districts was worth all the risk.  Frankly, I am glad we won though.”