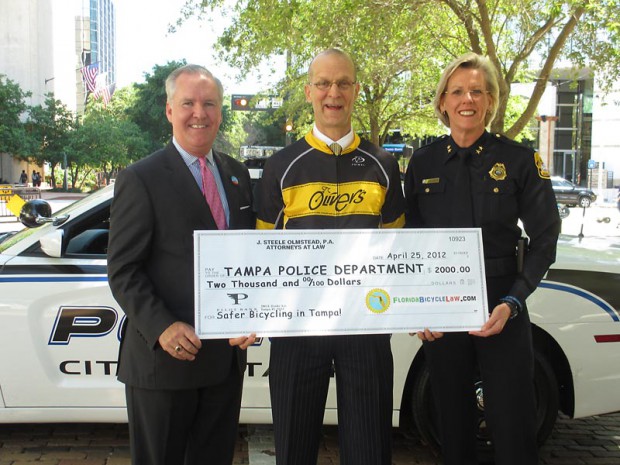 TAMPA — J. Steele Olmstead of FloridaBicycleLaw.com has donated $2,000 to the Tampa Police Department for more “Share the Road It’s the Law” decals on the police cars’ rear windows. Shown here with Steele is Tampa Mayor Bob Buckhorn and Chief of Police Jane Castor of the Tampa Police Department accepting the ceremonial check. The stickers will be placed on new and remaining cruisers which will patrol the streets of metropolitan Tampa.

Last year, Tampa Police began using the “Share the Road – It’s the Law ” decals, which extend across the width of the police cruisers’ rear window, and can be seen easily by anyone following any Tampa police cruiser. Seen in the second picture, the decals tell motorists that they must pass a bicyclist by a minimum distance of three feet in compliance with state law.

With the $2,000 donation, Tampa Police will be able to buy even more “Share the Road” window decals. SWFBUD has worked with Tampa Police Sgt. Carl GiGuere to arrange the donation by FloridaBicycleLaw.com and Olmstead to the Tampa Police Department.

Steele Olmstead said “the ‘Share the Road It’s the Law’ message is vital for motorists, who might not understand that bicyclists have a right to public roads. Most motorists do not understand that they are also required to pass a bicyclist by a minimum distance of three feet.” Olmstead said, “I am pleased that the Share the Road message will be backed by the authority of Tampa Police on cruisers across the city. It will result in a greater awareness by the general public and other law enforcement alike that we cyclist get three feet, no ifs, no ands, no buts — it’s the law.”

Watch the video by the Tampa Police Dept: