There are some good doctors

The above graphic is from an article from the Colliers magazine written in the 1905 and 1906 by Samuel Hopkins Adams. It was about fake medicines or “snake oils” and other unscientific “medicines”  which were being sold nationwide causing damage in some cases but in all cases stealing money from sick or injured people.  Now, we have another kind of

“fake medicine” which damages injured people  The so-called “independent” medical examiner system. It’s a scam used by insurance companies to avoid paying legitimate claims made in the course of a personal injury case.

Before we get too far, please understand, personal injury lawyers make money prosecuting claims where somebody has been injured. For many years now insurance companies have put out this myth of supposed widespread insurance “fraud” by personal injury lawyers. I’ve been practicing for 31 years. In that time, I have told my clients: “If you are not having symptoms two weeks after the crash, don’t make the claim.” Furthermore, every time I’ve had someone who wanted to be my client who claimed injury but 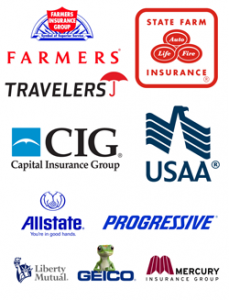 weren’t (and I can tell), I declined their case. Every other lawyer I personally know who does this kind of work does the same thing. We don’t have time to go through an entire case on the chance insurance company will not catch a “faker” and pay something. It’s too labor-intensive for real trial lawyers and clogs up our offices. So, don’t tell me there’s a lot of fraud in the system. That’s a myth from the insurance company publicity offices.

So, the first place these “independent” medical exams cut off real injuries are in personal injury cases making a claim against someone who injured you, family or a friend.

Youtube features parodies of the medical doctor who works routinely for insurance companies.  These are funny to watch because the cartoons say what the doctor is

The  real look of a real “Independent Medical Examiner”

money coins pour out from bag isolated on white

person who’s in pain, out of work, disabled and not at the job so they can bills, it’s not funny in the least. Using these doctors is a perversion of an insurance company’s duty to keeps its contract, adjust and fairly pay claims. The insurance companies call these “independent medical exams.” This is sheer ignorance. There is nothing “independent” about them.

The doctors hired by these insurance companies are names you do not know.  However, if you are in a lawsuit with State Farm, GEICo, Allstate, Progressive, 21st Century, Liberty Mutual, Travelers or Mercury Insurance Company you get to know them because you will be compelled in a “compulsory medical exam.” Many chiropractors also get onto this insurance company gravy train. To an experienced trial lawyer, they are the “usual suspects.” There are several in the Central part of Florida who regularly appear in my cases. One orthopedic doctor there even comes over to West Florida, Southwest Florida and Pensacola and Northwest Florida. Whatever work they may do, the amazing thing these doctors do is: billing the heck out of the insurance company and the insurance companies pay, and pay and pay. It’s pretty amazing.

In truth, the money these “hired guns” make is obscene for what they do.  The “exams” are 20 minutes usually. The review of records is reading records which are provided by the insurance company.  so, there just reading records. The standard charge to read records can be anywhere from $500-$1, 500 for one hour or less of work. The trial testimony can be pretty much anywhere from $4,000 to $10,000 for two hours of

The money made continues to amaze me and other trial lawyers. it stuns us how much the insurance companies spend on these hired guns when they could just pay the claim. So, you ask: “How much do these hired doctors make?” It’s pretty breathtaking.  First let’s examine what they do. and also first, remember these doctors are not treating these patients. It is a one-shot exam a review of records and they are done. Unless they are good at performance then the defense lawyer wants to bring them to court. The CME process is this: A CME doctor is hired by the insurance company through phone call or letter. The doctor’s office manager then send out an invoice for the retainer (usually $1,000 to $3000) (It’s getting lucrative already). The insurance company pays the retainer and sends the records and films for the doctor to look at. It may take him an hour to go through these records and look at the films. Usually they charge $750 to $1,500 an hour just to read.  Then, the doctor may write a letter (1 to 2 pages) giving his preliminary union. If the insurance company likes it, they set up a CME for the injured person. The CME is usually about 20 minutes max. Some are short as 7 to 10 minutes. Really, the video clips linked above are pretty accurate. The doctor may dictate the report while the exam is going on or later. Essentially he just adds more details to the preliminary report he sent to the insurance company adjuster.  If the case continues trial then the doctor is

deposed by the plaintiffs lawyer. That’s another $1,500-$5,000. Really folks this is a very lucrative practice. Some of these insurance doctors even charge if a videographer comes in. Oh, and finally, the icing on the cake: Many of these doctors are located in large cities. Insurance companies use them all over the state so if they’re really good performers. The way they bill for traveling to smaller counties? You’re not gonna believe this… The minute they leave their office they are billing insurance company until they return. One trial with one plaintiff can net one of these  insurance doctors $20,000-$30,000. 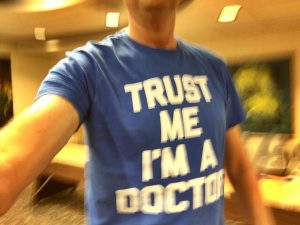 The second place you see these “independent” “experts” is in PIP payments. Yes, even your own insurance company may use one of these “experts.” In Florida, we have a type of insurance coverage called PIP. This stands for Personal Injury Protection insurance. This insurance is designed to avoid a person being stuck with large medical bills after an automobile crash whether it is their fault or not. It’s called “No – Fault.” That is it. “No – Fault” does not mean you cannot bring a lawsuit if you have been injured. That is a myth. it just means your insurance company will pay the first $10,000 of medical bills from an automobile crash. However, an insurance companies do this all the time, if they send you to a “independent” medical exam, that doctor can cut you off from your treatment. Usually they use chiropractors. So if you treat with a chiropractor count on your insurance company trying to cut off payment for his or her treatment. Why? Because so many chiropractors (800 –AxeGARY, 4-1-1* Pain for example) tried to bill and yet the full $10,000 as soon as possible. However, lots of chiropractors are feeding at this trough. So, your insurance company, requires you as a condition of your policy to see another chiropractor. There is in West Florida whose brother is a defense attorney. You can see him pop up anywhere in a six county area. He always borrows  somebody else’s office and gives an “independent” exam. his reports are all cookie-cutter and they generally say the same thing: you don’t need any more chiropractic care. There are neurologists that do this kind of work too. Same trick: they meet in a chiropractor’s, a court reporter’ s or office suite, examine you and issued the same cookie-cutter report: you don’t need any more treatment from your doctor. Sound independent? All the real trial lawyers I know share information about these doctors. None of them have any respect for these doctors who profit by saying the injured person is injured.

These are not the only doctors used by insurance companies to cut off claims. There are other insurance hired guns used by the insurance companies to avoid paying legitimate claims from San Antonio. Not San Antonio Florida, that’s San Antonio, Texas.  This is a company that created some “research” (with input from State Farm’s managers). Its “experts” tailor their reports to show that injured people making couldn’t be injured. In a case I had Some years ago, State Farm had this doctor from this company fly in from San Antonio, Texas to Tampa, drive up an hour to Circuit Court in Hernando County, Florida and tell the jury my client coulnd’t have been injured from the 55 mile per hour crash into the back of her car.  He said the force she experience from that high-speed crash was the same force as “stepping off a curb.” Fortunately, the jury didn’t buy it, but he had damaged my client’ s case. The last time I checked, that company was paid $6,000,000.00 from just one insurance company and its defendants lawyers over a three year period.  Which companies have used these hire guns? The same that hire these other medical “independent” hired guns: That’s right, State Farm, GEICo, Allstate, 21st Century, Mercury and Farmers, and with this outfit from San Antonio, USAA (which is based in San Antonio Texas).

Another place insurance companies use these “independent” medical exams to hurt legitimately injured people is the workers compensation area. In a  recent interview on WISC television in Wisconsin, a former judge of Worker’s Compensation claims, Joe Schaeve,  gave a retrospective of his career. There was one issue with claims he saw: the “independent” medical examiners routinely used by insurance companies to cut off claims. The view of these insurance doctors from very experienced judge was not encouraging:

“It winds up with the [insurance company] doctor saying ‘Not work related’ or ‘It’s all in his mind.’ You can almost sense it coming when you spend 30 years reading these reports.”

Judge Schaeve said a few of the experts’ opinions were so predictable that “it’s almost a waste of time to read the report because you know what it’s going to say.”

In Texas, the destruction of worker’s protection is so bad it appears there will be no 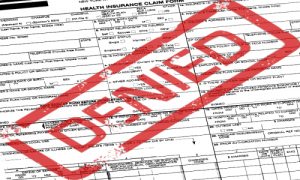 protection for injured workers now if they are hurt while making their employers money. This is the trend in all corporations.  We are going back to the era of the disposable worker from the early 1900s with the sweatshops, child labor and indentured workers. That’s when someone is hurt working, they are cast aside and left to fend for themselves. Why is that wrong? That worker was hurt making his employer money. Now, she can’t work and the employer just disposes of them.

The next time you hear about going to an “independent” medical exam, just remember how much these hired guns make. What these experts do to the search for truth is shameful. It is misleading or outright lying to the jury and deceiving them about the true nature of the injury of claimant has. It is destructive to our system of justice which is trying to seek fair  compensation for truly injured people.

If your lawyer doesn’t know the dark story behind these “independent” doctors, you may need to look for another lawyer.