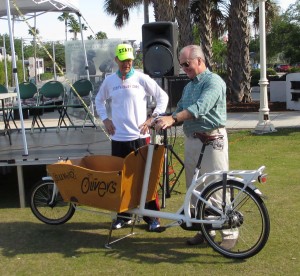 Shown here with Tampa Mayor Bob Buckhorn one of the celebrities attending, Steele watches on as Hizzoner rings the opening bicycle bell during the opening ceremonies of the SWFBUD 7th Annual Bicycle Bash at Cotanchobee Park in downtown Tampa, Florida.  The weather was stupendous with attendance by nine bicycle shops, four bicycle interested governmental entities, Sierra Club, Green Artery, Coastal Bike share and St. Josephs Children’s advocacy center.   There was a bike swap table and the even was catered with delicious food by Columbia Cafe from the Tampa Bay History Center.  Six “SWFBUDdy” awards were awarded to people in the West Coast Florida area who make bicycling better.  Unlike the weekend before and after, the weather was more than perfect.  Kids, dogs, bicycles and all manner of human powered vehicle came and we seen.   We all talked about bicycles, making it safer and great conversations were had by the bicycling community. 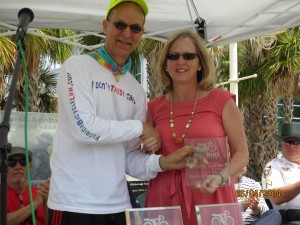 Here Steele presents Barbara Coleman, Assistant State Attorney of the Hillsborough County, with a SWFBUDdy Award for her outstanding work bringing to justice the killers of bicycle drivers in the West Central Florida Area.  She was roundly applauded for her excellent work by the attendees. Steele also gave out SWFBUDdy Award to Detective Jennifer Shelton of Hillsborough County Sheriff’s who solved the Mike Lee hit and run murder, Nancy and Gary Chapin from St. Petersburg, who are Auxiliary Rangers of the Pinellas Trail, Chip Haynes, bicycle enthusiast, advocate, cycling organizer and adventurer and Felicia Leonard of the City of Clearwater Parks and recreation department.