How death is diagrammed by law enforcement.

All too often, one of the most anger provoking stories I get sent is the story of the law enforcement officer who drives up at the scene in his car and has to administer the consequences to a motorist for running into a bicyclist. I cannot tell you how disheartening it is to find that the officer who arrives in his motor vehicle is more sympathetic, predisposed, aligned or oriented toward the perspective of the motorist who has hit the bicyclist. No consequences ensue, no citation is issued, no points on the license are assessed, no charges are passed on to the State’s Attorneys office.  Why?

It happens too much.  If a car runs into another car, it’s careless. Ticket issued. Period. Florida Statute Sec 316.1925 is written up on a citation and the offending motorist is cited quicker than you can say “license, insurance and registration please.”  A car running into another car is always given a citation without question. Bicycles are  vehicles when on the road.  However, car-driving law enforcement can’t seem to imagine the scenario where the offending motorist isn’t fully charged.  This happens when a motorist hits or hits and kills.  The reasons? “The bicyclist swerved” is often written down.  As a practical matter, physics obviates this as a valid excuse? Why? Bicyclists, by law, are given the right 4.5  feet of every road they are on under Florida Statutes 316.083(1).  Any bicyclists (unless  your wheels are 15 inch in diameter or less) must overcome an almost inexorable, gyroscopic force to swerve from a direct path of travel and deviate outside that 4.5 feet she/he gets for safe travel.  In other words, you can’t swerve 3 feet into the car’s path if you are traveling 12-18 miles per hour. The motorized law enforcement office does not know this.  Result: BS excuse bought, no ticket, no consequence.

It happens because we do not speak up before it happens.

This was driven home when I visited Hancock Groves in Pasco County in November. It is a fourth generation citrus farm run by Joe Hancock. Or should say was run by Joe Hancock. As I was buying some citrus that November day I ask where Joe was and was told by the person running the counter: “Oh, didn’t you hear? Joe was hit and killed on his bicycle.” This news and the deep loss hearing this news is with me still.   Neither has it left Joe’s widow, Jane, nor his son, nor his community, nor the other citrus farmers, nor his friends, nor anyone ever who stopped to buy citrus  at his farm for the past 57 years.  It was broad daylight.  The young woman who killed Joe said she “was not distracted.”  There was a slight hill over which, had she been looking, she could have seen and avoided this prince of a man. And law enforcement bought her story.  She got a ticket, but she was not charged with negligent homicide. 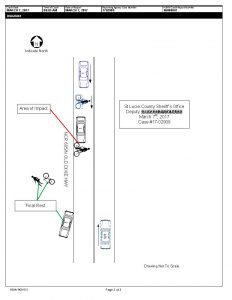 How Alan Snel’s crash was diagrammed.

This was, again, brought home when I received a call from Alan Snel. If anyone knows of bicycling in the State of Florida, you know his name well.  He lives on bicycle. For years, he was a pain in the side of the recalcitrant leaders of West Central Florida. He firmly, persistently, and assiduously urged government leaders to recognize the natural environment for bicycles in Florida and make it safer for cyclists and pedestrians.  He never missed an opportunity to show up, stand up and speak up  to make the roads safer for us. He moved on, but where ever he went he spoke up and showed up to speak for bicyclist rights.

Alan always spoke up frequently and articulately until his voice was recently silenced by a terrible crash.  His voice has returned. I will let his voice tell you his experience of  injustice when law enforcement fails to apply the laws: 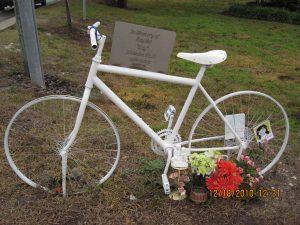 You will only see this ghost bicycle here. It is was taken down by the University. The cancer remedies and cures its scientist/driver was working on will never save the lives of U. S. citizens.

You now have the choice.

You can skip the public hearings at your county commission, Florida DOT, Florida Highway Safety and Motor Vehicle or city council meeting. You can fail to renew your Florida Bicycle Association membership. You can fail to write your state representative, city Council Member, County Commissioner, local sheriff, chief of police or Florida Highway Patrol commandant and just see when it is your time whether you get justice.

Or, you can show up, speak up and stand up for yourself, your family and our rights as bicyclists.

Choose now and choose wisely. Your time is coming.